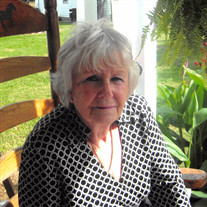 VIRGILINA - Mrs. Cecil Wilson Tuck of Wilson Road, Virgilina, VA passed away Saturday, February 23, 2019 at the age of 89. She was born in Halifax County, VA on May 20, 1929 to Asa Jerry and Emma Sue Long Wilson who predeceased her. She was... View Obituary & Service Information

The family of Cecil Wilson Tuck created this Life Tributes page to make it easy to share your memories.

Send flowers to the Tuck family.