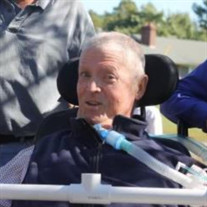 Mr. Chastain Frederick “Freddy” Collins, III of South Boston passed away on Friday, July 9, 2021, at the age of 76. Born in Richmond, Virginia, he was the son of the late William A. Collins and Ina R. Collins. Freddy lived his life with Muscular Dystrophy, but by no means was defeated by it. Freddy was school secretary at Scottsburg Elementary. He and his brother, Billy, owned and operated The Coin and Tackle Shop on Seymour Drive for several years. Later, Freddy sold phone systems to businesses on eBay and had other eBay businesses. Freddy also took courses on electricity, tax preparation, and birding with the Cornell School of Ornithology home course. He was an avid bird watcher and fisherman. His main talent, by far, was being a friend and confidant. His gentle understanding manner, keen wit and intellect made everyone he met instantly like him. Survivors include sister, Dixie Collins Stephens of Pine Knoll Shores, NC; niece, Katherine “Lucille” Boyer of Raleigh, NC; nephews, John D. Stephens of Harrisonburg, VA, Jeremy F. Stephens of Nashville, TN and Jacob W. Stephens of Danville, VA; 8 grandnieces and nephews; and loving caregivers, Marion Chandler, Hazel Thaxton, Nick Thaxton, Tonisha Martin, Londin Martin, Jerkia Cole, and Phillip Ferrell. Freddy was preceded in death by his brother, William A. Collins, Jr. Services will be held in the chapel at Brooks Lyon Funeral Home on Tuesday, July 13, 2021 at 2:00 P.M. The family will receive friends one hour prior to the service. Burial will take place at Halifax Memorial Gardens with the Reverend Glenn Coleman officiating. Online condolences may be expressed to the family at www.brookslyon.com. The family is being served by Brooks Lyon Funeral and Cremation Services, 115 Main Street, South Boston, VA.

Mr. Chastain Frederick &#8220;Freddy&#8221; Collins, III of South Boston passed away on Friday, July 9, 2021, at the age of 76. Born in Richmond, Virginia, he was the son of the late William A. Collins and Ina R. Collins. Freddy lived his life... View Obituary & Service Information

The family of Chastain Frederick Collins III created this Life Tributes page to make it easy to share your memories.

Send flowers to the Collins family.