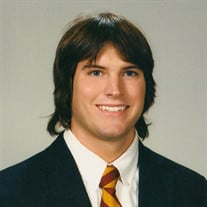 HALIFAX Jonathan “David” Baskervill, 33, of Halifax, VA passed away Thursday, September 5, 2019, after a heroic 14 year battle with ALS. He was born in Halifax County on April 27, 1986 to Robin Williams Baskervill and William Nelson “Bill” Baskervill, Jr. David was a 2004 graduate of Halifax County High School. Quite the athlete, he participated in many varsity sports including football, basketball, soccer, tennis, golf and the swim team. David was a 2008 graduate of James Madison University. There he earned his Bachelor’s degree in Finance and was a KA fraternity brother. David, known by his friends and family as “D-Bass” & “Rambo”, loved Duke basketball, collecting Nike sneakers and memorabilia and was a connoisseur of craft beers. He deeply loved and cherished time spent with his nephews. He was a member of Main Street United Methodist Church. In addition to his parents, he is survived by his brother, Nelson Baskervill and his wife, Candace; nephews, Casper and Duke; paternal grandmother, Julia Baskervill and a host of other family and friends. A Celebration of David’s Life will be held on Saturday, September 14, 2019 from 5:00 PM – 7:00PM at the Halifax Country Club. The family requests those wishing to give memorials please consider the Duke ALS Clinic, 710 W. Main Street, Suite 200, Durham, NC 27701.

The family of David Baskervill created this Life Tributes page to make it easy to share your memories.

Send flowers to the Baskervill family.