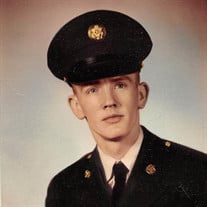 Harold Stuart Keatts (75) of Virginia Beach, formerly of South Boston and Mathews, a U.S. Army veteran born on April 17, 1944, passed away on February 22, 2020, at Sentara Virginia Beach General Hospital with his family by his side. Stuart was a member of Glenwood United Methodist Church, but attended Virginia Beach United Methodist Church. He was a faithful attendee and loved both churches. Stuart served in the US Army from 1963-1966. He worked as a store manager for the A&P/Super Fresh Supermarket, retiring after 30 years of employment. He enjoyed the last 3 years after moving to Virginia Beach with his wife, riding his electric scooter on the boardwalk and spending time with his children and grandchildren. Survivors include his mother, Carolyn Palmer Keatts of South Boston; his wife of 52 years, Hope Pulliam Keatts; son Tony Keatts and wife Kristi of Newport News; daughter Tennille Powell and husband Scott of Williamsburg; granddaughters, Abby and Meagan Keatts; grandsons Ethan and Logan Powell; brother Kenneth Keatts; sister Faye Powell and her husband Lowell all of South Boston; sisters-in-law Lajanice Morris, and her husband Riley, and Mary Jane Stembridge as well as a host of aunts, nieces, nephews and cousins. He was predeceased by his father George Allen Keatts, sister Eleanor K. Puryear and brothers-in-law, James Bagby and Douglas Puryear; brother Jerry A. Keatts and sister-in-law Dale Keatts and nephew Rodney (Buddy) Bagby and neice Kathryn Keatts Clay Tatem. Funeral Services will be conducted at Glenwood United Methodist Church on Tuesday, February 25th at 11 a.m. Services will be officiated by Pastor Betty Marshall with burial to follow in the church cemetery. A reception and visitation will be held afterwards in the fellowship hall. The family will receive friends on Monday, February 24th at Brooks Lyon Funeral Home from 6:00 - 8:00PM. Any memorials are requested to be made to Glenwood Cemetery, 4030 Philpott Road, South Boston, VA 24592. Online condolences may be expressed to the family at www.brookslyon.com. The family is being served by Brooks Lyon Funeral and Cremation Services, 115 Main Street, South Boston, VA.

Harold Stuart Keatts (75) of Virginia Beach, formerly of South Boston and Mathews, a U.S. Army veteran born on April 17, 1944, passed away on February 22, 2020, at Sentara Virginia Beach General Hospital with his family by his side. Stuart was... View Obituary & Service Information

The family of Harold Stuart Keatts created this Life Tributes page to make it easy to share your memories.

Send flowers to the Keatts family.