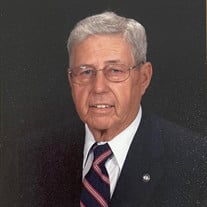 Virgilina, VA Heiter Griffin passed from this life surrounded by family and went to be with his Lord and Savior, October 16, 2021, at the age of 88. He was born on February 22, 1933, in Nelson, VA to R. Lee Griffin and Emma Davis Griffin. He married Betty Forlines Griffin on January 3, 1959. They fell in love on their first date, August 17, 1955, and were constant companions, best friends and happily married for over 62 years. Left to cherish his memory is his wife, Betty; his daughter, Teressa G. Davis and husband, Randy; grandchildren, Bradley Griffin (Liza), Michelle D. Conner (Matt), Holly G. Elliott and Brittney Davis (Ryan); great grandchildren, Leah Griffin, Griffin Elliott, Brody Conner, Anne Marie Griffin, Grayson Elliott and Rylee Conner. He is also survived by a sister, Audrey G. Wallace of Lynchburg and daughter-in-law, Jean P. Griffin. He additionally leaves behind his beloved dog, PeeDee. Heiter was preceded in death by his parents; his beloved son, Horace Lee Griffin; sister, Hazel G. Sizemore and brothers-in-law, T.A. “Red” Sizemore and Thomas Wallace. Heiter grew up working on the family farm in Nelson and continued farming throughout his life. He loved working the land, planting, watching crops grow and harvesting. He was always happy on a tractor or any other kind of machinery. In addition to farming, he spent many years in road construction operating heavy equipment. He worked with several companies building interstate highways throughout Virginia in the 1950’s. He went to work for Virginia Department of Highways in 1966 as an operator and retired after 30 years as an inspector over secondary road resurfacement, bridges and road construction. Heiter was a member of Aarons Creek Baptist Church in Virgilina, VA and previous member of Hitesburg Baptist Church. He was a man of God serving many years as deacon of both churches. He served his Lord in any way he could. Heiter was always ready to help a friend, neighbor or anyone in need. He loved people and never met a stranger. All that knew him, knew he loved to talk and certainly had the gift of gab. Unfortunately, communication was one of the first things he was robbed of by dementia. Heiter was also a proud member of the Masonic Lodge of Virgilina. He loved his brothers in the lodge and served in several positions at the local and state level. Funeral services will be held at 2:00 PM on Tuesday, October 19 at Aaron’s Creek Baptist Church with burial to follow at Hitesburg Baptist Cemetery. The Reverends Robert Pruitt and Randy Holmes will officiate the service. The family will receive friends on Monday, October 18 from 6 – 8 PM at Brooks Lyon Funeral Home and at other times at 3045 Aaron's Creek Road Virgilina. Online condolences may be expressed to the family at www.brookslyon.com. The family is being served by Brooks Lyon Funeral and Cremation Services, 115 Main Street, South Boston, VA.

Virgilina, VA Heiter Griffin passed from this life surrounded by family and went to be with his Lord and Savior, October 16, 2021, at the age of 88. He was born on February 22, 1933, in Nelson, VA to R. Lee Griffin and Emma Davis Griffin. He... View Obituary & Service Information

The family of Heiter Griffin created this Life Tributes page to make it easy to share your memories.

Send flowers to the Griffin family.