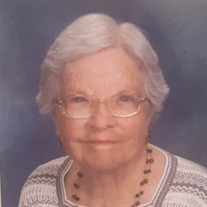 SOUTH BOSTON Helen Perkins Chaney Vernon of South Boston passed away on Monday, December 27, 2021at Sentara Halifax Regional Hospital. Born in Halifax County on November 6, 1928, she was the daughter of the late Jesse and Louise Bray Perkins. She was preceded in death by her first husband, Arthur Reginald Chaney and her second husband, Augustus "Gus" Vernon. Helen was a retired secretary with Burlington Industries. She was a member of Ash Avenue Baptist Church where she also was a former Sunday School teacher. Her community involvement included tour director of the AARP Chapter 4327, past president of the Woodmen of the World and the local Town and Country Social Club. Helen is survived by a sister, Joyce Mestayer of Washington; step-daughter, Gale Meadows of South Boston; step-son, Gary Vernon of South Boston; and other family members. In addition to both of her husbands, she was preceded in death by a sister, Jeanette Keesee of South Hill. A Memorial Service will be held on Sunday, January 2nd at 2:00 PM, with visitation one hour prior to the service at Brooks Lyon Funeral Home. A private interment will be in the Wylliesburg Baptist Church Cemetery, Wylliesburg, VA. In lieu of flowers, memorials may be made to the American Heart Association, PO Box 840692, Dallas, TX 75284-0692 or the Halifax County Cancer Association, PO Box 1891, Halifax, VA 24558. Online condolences may be made to the family at www.brookslyon.com. The family is being served by Brooks Lyon Funeral and Cremation Services, 115 Main Street, South Boston, VA.

The family of Helen Perkins Chaney Vernon created this Life Tributes page to make it easy to share your memories.

Send flowers to the Vernon family.