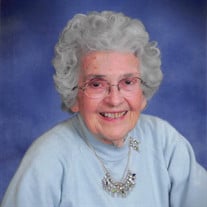 Julia Alice Moore Baskervill, 96, passed away peacefully at the home of her daughter, on Friday, December 4, 2020. Born in Mecklenburg County, VA on March 23, 1924, she was the daughter of the late William David Moore and Julia Mary Chappell Moore. She was married to the late William Nelson Baskervill. She was predeceased by her grandson Jonathan David Baskervill and her great grandson Michael Scott Kleyla. She was the 17th of 19 siblings, all of whom predeceased her. Julia Alice was a graduate of Clarksville High School, Class of 1941, and then attended Smithdeal-Massey Business School. After graduation she worked in the War Dept., Special Services at the Pentagon. After the war she worked at Duke Hospital where she met the love of her life. After marriage they moved to South Boston where they raised their family. She worked at Fry, Jordan & Wilson Insurance Agency, the South Boston Clinic and then as Dr. William R. Watkin’s private secretary. An active member of First Presbyterian Church in South Boston for 71 years, she served in many roles including being an Elder. Left to cherish the memories of Julia Alice are her children, Julia K. Rille (Ernest) of Chesapeake. VA, William Nelson Baskervill (Robin) of Halifax, VA, Charles Thornton Baskervill (Pamela) of Petersburg, VA and Margaret Baskervill Talley (William, IV) of Petersburg, VA; 8 grandchildren; 10 great grandchildren; many beloved nieces, nephews, friends and very special friends, Ginny Troy and Dee Raney. Her greatest loves were her faith, family and traveling. A private service will be held at her childhood church, now Bluestone Independent Baptist Church, with burial at the church cemetery. A Celebration of Life service will be held at a later date. Donations may be made to Glory Ridge, a spiritual retreat founded by her brother, Rev. George A. Moore at P. O. Box 363, Marshall, NC, 28753, or to First Presbyterian Church, 800 North Main Street, South Boston, VA 24592.

Julia Alice Moore Baskervill, 96, passed away peacefully at the home of her daughter, on Friday, December 4, 2020. Born in Mecklenburg County, VA on March 23, 1924, she was the daughter of the late William David Moore and Julia Mary Chappell... View Obituary & Service Information

The family of Julia Alice Moore Baskervill created this Life Tributes page to make it easy to share your memories.

Julia Alice Moore Baskervill, 96, passed away peacefully at the...

Send flowers to the Baskervill family.