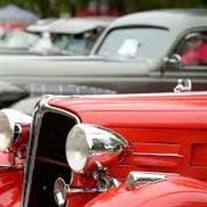 Mr. Kenneth Lewis Compton passed away Saturday, June 30, 2018 at the age of 74. He was born in Newport News, VA on April 3, 1944 to the late Floyd Lewis Compton and the late Beatrice Thompson Compton. He was married to Diana Lee Compton who... View Obituary & Service Information

The family of Kenneth Lewis Compton created this Life Tributes page to make it easy to share your memories.

Send flowers to the Compton family.