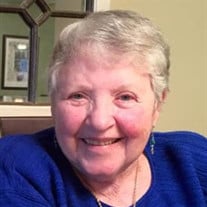 SOUTH BOSTON Marcelle “Marcie” Lambert Senter of South Boston,VA passed away on Friday, June 21, 2019 at the age of 78. She was born in Manchester, NH on March 11, 1941 to Armand Lambert and Jeanette Martel Lambert, both of French Canadian origins. Marcie and her siblings were raised speaking French fluently at home and school. Marcie was a true virtuoso, able to master any skill. As a young girl, she loved helping her father run his small business, a local grocery store where she “learned to butcher meat and estimate inventory before most children could count.” She entered the Civil Air Patrol as a teenager, where she met and later married her husband at 19. She had six children in less than nine years. Divorced at 38, she received her Registered Nurse degree while working full time as a single mother in Newport News, VA. Her strength and selflessness shone in her work as a nurse in Labor & Delivery and the Emergency Room. She also served as a nursing supervisor, a laser nurse, and a crisis counselor. After retiring from hospital work, Marcie moved to Halifax County and became a home health nurse. In her second retirement, she cared for several elderly friends in her home. She was an active member of St. Paschal Baylon Catholic Church, often volunteering in social justice ministries and the community. In her later years, many knew Marcie as “Mémѐre” (French Canadian for “Grandma”), reflecting her primary identity as beloved grandmother and matriarch. Alongside her family, she enjoyed taking care of her land and animals, playing board games, and keeping up with the news. She was happiest with a grandchild on her lap helping her steer her riding lawn mower. Marcie’s smile was infectious, her sense of humor celebrated. She always had a hug to give and a hand to lend. Her spirit will never be forgotten. Marcie is survived by daughters - Janet Dorsey, Judith Venezia and Diane Espinosa – and two sons - Richard Senter and Jeffrey Senter. She was preceded in death by her eldest son, Donald “Butch” Senter. She is survived by her eleven grandchildren and 5 great-grandchildren, as well as her siblings Connie Duquette, Paul Lambert, and Bob Lambert. She was preceded in death by her brothers Armand, Jean, and Donald Lambert. A Memorial Mass will be held at 11 AM on Wednesday, July 3 at St. Paschal Baylon Catholic Church. Memorial plants and flowers are welcome (please set delivery to St. Paschal Baylon Catholic Church, 800 John Randolph Blvd, South Boston, VA 24592 for July 2 before 1 PM or July 3 before 10 AM). Gregory Florist at (434)572-3908, Puryear's Florist at (434)572-4936 and Buttercups Florist at (434) 575-1035 are local options. Online condolences may be expressed to the family at www. brookslyon.com.

SOUTH BOSTON Marcelle &#8220;Marcie&#8221; Lambert Senter of South Boston,VA passed away on Friday, June 21, 2019 at the age of 78. She was born in Manchester, NH on March 11, 1941 to Armand Lambert and Jeanette Martel Lambert, both of French... View Obituary & Service Information

The family of Marcelle "Marcie" Lambert Senter created this Life Tributes page to make it easy to share your memories.

Send flowers to the Senter family.