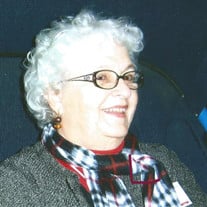 Mrs. Myrtle Anderson Wilmoth reunited with her beloved husband, David, on Saturday, January 23, 2021 at the age of 79. Born in Halifax County on February 2, 1941, she was the daughter of the late John Roy “Dick” Anderson and the late Ilva Fallen Anderson Lee and was married to David Bernard Wilmoth for 60 years. Myrtle was a member of Hunting Creek Baptist Church. She was a caring and loving person, as many would say she never met a stranger. But the one thing she cared most deeply for was her family and they were her life. She is survived by her children, David Anthony Wilmoth (Jill), Morris Dale Wilmoth (Tracey) and Angela Lynne Wilmoth; grandchildren, Mitzi Gunn (Matt), Traci Wilmoth (John), Amanda Lloyd (Brian), Jeremy Wilmoth (Jessica) and Nick Wilmoth (Allison); 12 Great Grandchildren with one on the way; one great great grandchild on the way; sisters, Frances A. Taylor, Connie Kirks and Dana Owen (Ronnie); and her brother, Donald “Buddy” Fallen. In addition to her parents and husband, Myrtle is preceded in death by a brother, Roy Thomas Anderson. Graveside services for Mrs. Wilmoth will be held on Tuesday, January 26, 2021 at 2:00PM in Clover Cemetery with the Reverend Tim Owen officiating. Due to Covid-19 regulations, no formal visitation will be held, however the public is encouraged to pay their respects to Mrs. Wilmoth at Brooks Lyon Funeral Home on Monday, January 25 from 9:00AM until 8:00PM. In lieu of flowers, please consider donations to the Clover Vol Fire Dept, PO Box 199, Clover, VA 24535 or the Triangle Vol Fire Department, 1051 Morton's Ferry Rd., Nathalie, VA 24577.

The family of Myrtle Anderson Wilmoth created this Life Tributes page to make it easy to share your memories.

Send flowers to the Wilmoth family.