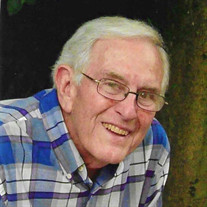 Page Seward Roberts, 91, formerly of Clarksville, VA and more recently of Henrico County, VA died on April 22, 2022 at Spring Arbor Assisted Living. Mr. Roberts was born in Wake County, NC in 1930, the son of John Edward Roberts and Maude Mildred Seward Garrod Roberts. Page was educated in the Clarksville public schools and attended The University of Richmond where he played on the baseball team. On July 17, 1953, he married his childhood sweetheart, Ann Gayle Winston, also of Clarksville, VA. He owned and operated Roberts Men’s Shop and later Clarksville Auction and Real Estate Company. Following in the footsteps of his father and a brother, Page became a tobacco auctioneer in 1955. His career selling tobacco spanned over 45 years and included the burley and flue-cured markets in South Hill, Lawrenceville, Danville, Fairmont, NC, Winston-Salem, NC and Lexington, Kentucky. In 1982, Page Roberts won the title of World Champion Tobacco Auctioneer in a competition sponsored by R.J. Reynolds Tobacco Company as part of their “Pride in Tobacco” campaign. Page and Ann Gayle subsequently toured the country for a year representing RJR, appearing on television and radio shows along with numerous celebrities. Page was an active member of the community, participating in various civic-minded organizations and serving on local boards. He was a founding member in the early 1970’s of Virginia Southern Bank. His hobbies included golf and tennis, mostly as a member of Kinderton Country Club, as well as fishing and boating on Buggs Island Lake. Page remained extremely active into his mid-80’s, walking several miles every day. A kind man of great faith and integrity, Page was a member of Clarksville Presbyterian Church where he thoroughly enjoyed singing in the choir. He was the epitome of a southern gentleman, devoted to God, family and community. A shining example of a thoughtful and caring son, husband, father and friend, Page never put his own needs over the needs of others. He worked hard his entire life while always being available when his family needed him. His infectious charm and loving nature will be missed by his family and friends. In addition to his devoted wife, Ann Gayle Winston Roberts of Henrico, VA, surviving are two loving children: a son, David Page Roberts and his wife Caroline of White Post, VA and a daughter, Dana Gayle Roberts Houghtaling and her husband Robert of Mechanicsville, VA. Mr. Roberts leaves four adoring grandchildren: Dr. David Page Roberts, Jr. and his wife Quynh, Ashton Gayle Long Apicella and her husband Matthew, William Barrington Roberts and his wife Christiana, and Claiborne Porter Long. In addition, Page is survived by three great-grandchildren, Edie Gayle Apicella, Winfred Ky Roberts, and Lillian Frances Page Roberts. Five brothers and two sisters predeceased him. The family wishes to thank the At Home Care Hospice team and the staff of Spring Arbor who assisted Page and his family during this difficult time. A memorial service will be held at 1:00 pm on Friday, May 6 at Clarksville Presbyterian Church, The Rev. Annette Eckerd Goard, officiant. Interment at Oakhurst Cemetery will be private. In lieu of flowers, the family requests memorial contributions be made to Clarksville Presbyterian Church, 502 Virginia Ave., Clarksville, VA 23927.

The family of Page Seward Roberts created this Life Tributes page to make it easy to share your memories.

Send flowers to the Roberts family.