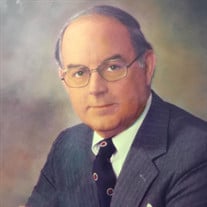 RICHMOND, VA Wallace Lee Chandler, retired Vice-Chairman of Universal Corporation and widower of Nita H. Chandler, passed away on August 25, 2021. He is survived by his daughters and sons-in-law: Elizabeth and Marc Hallberg; Brenda and Frank Bell; Blair and Mike Grappone. Grandchildren: Lee and Katie Hallberg; Heather and Matt Donohue; Brittany and Bruce Rosell; Tripp Bell; Currie and Anna Bell; Christopher and Emily Bell; Ashley Grappone and Lawrence D’Archangelo; Michael Grappone. And great-grandchildren: Brynn and Cooper Hallberg; Brayden and Madison Donohue; Riley Rosell; Ethan and William Bell; James Grappone. He was preceded in death by his loving wife of 64 years, Juanita (Nita) Chandler, his parents, Esma and Joseph Beale Chandler, Sr. and brothers, Clement Chandler, Beale Chandler, Lindy Chandler, as well as four sisters, Laura V. Mills, Josephine Grimsley, Louise Coble, and Ruth Llewellyn. Mr. Chandler was born on October 18, 1926 and graduated from Elon College (now Elon University) in 1949. He graduated from Law School in 1953 and was admitted to the Virginia Bar in 1954. He was employed by Universal Corporation (formerly Universal Leaf Tobacco Company) in many capacities, including General Counsel, Senior Vice President, several years as Executive Vice President, five years as Vice-Chairman, and he served many years on the Board of Directors and Executive Committee. He was elected an officer of the corporation at age 27, the youngest person ever elected an officer of the corporation. His career with Universal spanned 48 years, including 32 years as a Director. He served on the Board of most of Universal’s major subsidiary companies. He was former Director of Landamerica Corporation (formerly Lawyers Title Insurance Co.), AON Asset Management Funds, Regency Bank, and the Regional Board of the original Bank of Virginia. Mr. Chandler served as an active member of the Elon University Board of Trustees for 40 years before being elected a Life Trustee in 2008. He was Chairman for 3 years and was active at various times on most board committees. Honors and awards include an Honorary Doctor of Commercial Science degree from Elon University in 1983, a Distinguished Alumni Award and a Trustee Service Award. A residence hall is named “Wallace L. Chandler Hall” in recognition of his service to Elon. The beautiful fountain and plaza in front of the business school are also named in his honor. He was a member of the Elon Numen Lumen Society which recognizes significant financial supporters for the University. In 2006 he received the Elon Medallion for loyal and meritorious service. In recognition of his service to Elon, Mr. Chandler went to Miami in 2005 to receive the Case Ernest T. Stewart National Award for Alumni Volunteer Involvement. Mr. Chandler received 3 appointments from Virginia Governors to the Board of Visitors of Madison College (now James Madison University), serving a total of 10 years, 2 years as Chairman. He served on the JMU Foundation Board for 23 years, 9 years as Chairman. He received an Honorary Doctor of Laws degree in 1983, the first awarded by the University. A mini-student center and dormitory was named “Wallace L. Chandler Hall” in 1973. He also received a Distinguished Service Award from JMU. He participated on many civic boards including Metro Richmond Chamber of Commerce, Richmond Renaissance, the Metro Business Foundation, and the Men’s Board of the Virginia Home. He served on a committee for the Chamber of Commerce to study the Richmond School System. Mr. Chandler was a member of The Country Club of Virginia, the Commonwealth Club, a former member of the Princess Anne Country Club of Virginia Beach and the Richmond Gentry. An active member of River Road Church, Baptist for over 60 years, and at various times was on most boards and committees, serving as Chairman of several major ones. He was a trustee of the church for many years. He was a life member of the Virginia Bar and a longtime member of the Richmond Bar Association. During World War II he volunteered for service in the army at the age of 17 and served on active duty for two and a half years. He spent 1 year overseas as a Lieutenant and served in the Armored Reserve for an additional seven years. During his lifetime he traveled to 28 foreign countries and all fifty states. His hobbies included golf, travel, antique cars, and spectator sports. A memorial service will be held at 2 pm on Wednesday, September 1 at River Road Church, Baptist located on River Road at Ridge Road, in Richmond. The family will receive friends on the front lawn immediately following the service. A graveside service and burial will be at Oak Ridge Cemetery in South Boston, Virginia at 11:00 am on Thursday, September 2 for family and friends from that area. The Chandler family appreciates the love, respect, and affection his friends shared so generously with him during his life. Memorial contributions can be made to River Road Church, Baptist, 8000 River Road, Richmond, Virginia 23229. Condolences can be sent care of Brenda Bell, 2750 Barrow Place, Midlothian, VA 23113. Graveside services provided by Brooks Lyon Funeral and Cremation Services, 115 Main Street, South Boston, VA. 24592

RICHMOND, VA Wallace Lee Chandler, retired Vice-Chairman of Universal Corporation and widower of Nita H. Chandler, passed away on August 25, 2021. He is survived by his daughters and sons-in-law: Elizabeth and Marc Hallberg; Brenda and Frank... View Obituary & Service Information

The family of Wallace Lee Chandler created this Life Tributes page to make it easy to share your memories.

Send flowers to the Chandler family.