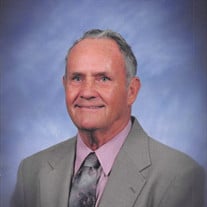 SOUTH BOSTON - William Henry Wilborne went to be with the Lord on April 30, 2017. Born in South Boston, VA he was the fourth of thirteen children born to Nora Scott and Jefferson Davis Wilborne, Sr. on January 25, 1925. Henry was a contractor and a business man, could figure out how to fix or do most anything and was always willing to lend a helping hand to family and friends. He was the past owner of Wilborne Carpet and Tile in South Boston, The Country Village Mobile Home Park in Danville, VA, and Wilborne Rentals in South Boston. A member of Southside Baptist Church for many years, he was honored by being an honorary deacon. Henry is survived by his wife, Elizabeth “Lib” Seamon Wilborne, daughters, Cynthia Bradley (Ed) and Linda Hughes (Ben), grandchildren, Denise Landreth (David), Scott Wilborne, Daniel Bradley (Tracey), Candee Pulliam (Nelson), Elizabeth Goldthwaite (Chad), Timothy Wilborne (Amber), and Andy Seamster, eleven great grandchildren, siblings, Sylvia Thomas, Donald Wilborne, Mary Rowe, Robert “Bobby” (Pat) Wilborne, and Jacqueline “Jackie” Cuneo (Chris), and many nieces and nephews. Along with his parents, he was preceded in death by his son, Dennis Wayne Wilborne, sisters, Elsie Snead and Ruby Ford, brothers, Marvin, Jefferson Davis, Jr. “J.D.”, Raleigh, Harvey, and Franklin Wilborne. The family would like to thank his caregivers, Faye Kean, Barbara Holt, Inez Baylous, and Dana May for all the love and care and Sentara Halifax Hospice. Funeral services for Henry Wilborne will be held Wednesday, May 3 at 2:00 PM at the Brooks Lyon Betty B. Jones Chapel with Reverend Don Bryant officiating. Burial will follow at Oak Ridge Cemetery. The family will receive friends on Wednesday, May 3 from 1:00 PM until 2:00 PM at Brooks Lyon Funeral Home and at other times at the home, 3164 East Hyco Rd., South Boston. In lieu of flowers, donations may be made to Southside Baptist Church, 2140 Alphonse Dairy Rd., South Boston, VA 24592 or Sentara Halifax Hospice, 2204 Wilborn Ave., South Boston, VA 24592.

SOUTH BOSTON - William Henry Wilborne went to be with the Lord on April 30, 2017. Born in South Boston, VA he was the fourth of thirteen children born to Nora Scott and Jefferson Davis Wilborne, Sr. on January 25, 1925. Henry was a contractor... View Obituary & Service Information

The family of William Henry Wilborne created this Life Tributes page to make it easy to share your memories.

William Henry Wilborne went to be with the Lord...

Send flowers to the Wilborne family.