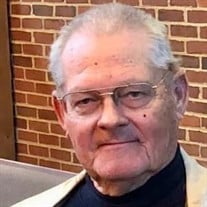 SOUTH BOSTON Willie Truman Fitts, 76, peacefully moved to heaven to be with his Lord on December 30, 2021. He was born June 8th, 1945 in Mecklenburg County, Virginia to Carrie Lee Thomas (Spangler) and Richard Lewis Fitts who both preceded him in death. Willie T., as he was affectionally known, lived a full life, which was defined by his love for Jesus, and his unconditional love for his wife, daughter, and family. To know him was to love him, because he always wore a smile and loved to laugh. Wille is survived by his high school sweetheart, Claudia, who became his wife of 55 years. He was an awesome dad to one daughter, Wendy Brooks and her husband Henry A. Brooks, Jr. of Cluster Springs, Virginia. He was a proud Poppa to Jacob David Wilson along with his wife Sarah Peyton Wilson of Wirtz, Virginia, Joseph Marshall Wilson of Cluster Springs, Virginia, and Mekhi and Jay Brooks both of Halifax, Virginia. He is also survived by his sister, Ruby Crowder of Chase City, Virginia who quit school at thirteen years old to help raise him because their mother was bedridden with an illness, and along with several special nieces and nephews. In addition to his parents, Willie was preceded in death by one sister, and two brothers. Willie graduated from Halifax County High School in 1965 as a standout Comets baseball athlete. He had the esteemed opportunity to be invited to try out for the Pittsburgh Pirates baseball team where they were prepared to make him an offer. However, Willie’s dedication to care for his mom drove his decision to not pursue playing baseball fulltime. Nevertheless, his passion for playing baseball continued throughout the years, as he played on several local teams. Willie enjoyed spending time at home watching sports, was a devoted Carolina Tarheels fan, could often be found “piddling” outdoors, and relaxing in his recliner with “Comette” his special cat. His kind and generous heart encountered so many people, and he had so many treasured friendships with his VIR buddies, which is where he enjoyed working part-time in Security for many years after his retirement from the United States Postal Service. In lieu of flowers, consider memorial donations to the Cluster Springs Volunteer Fire Dept. PO Box 110, Cluster Springs, VA 24535; Mt. Gilead Full Gospel International Ministries 2501 Mt Gilead Blvd, Richmond, VA 23235 or online at mtgileadfgim.org; or Shalom Outreach 16524 Hayes Ln., Woodbridge, VA 22191 or online at ShalomOutreach.org. Visitation will be held on Thursday, January 6th, 2022 at Brooks-Lyon Funeral Home in South Boston, Virginia from 6 to 8pm. A graveside service will be held at 2:00 PM on Saturday, January 8th , 2022, at Harmony United Methodist Church in Alton, Virginia with Minister Wendy Brooks officiating. Online condolences may be expressed to the family at www.brookslyon.com. The family is being served by Brooks Lyon Funeral and Cremation Services, 115 Main Street, South Boston, VA.

SOUTH BOSTON Willie Truman Fitts, 76, peacefully moved to heaven to be with his Lord on December 30, 2021. He was born June 8th, 1945 in Mecklenburg County, Virginia to Carrie Lee Thomas (Spangler) and Richard Lewis Fitts who both preceded him... View Obituary & Service Information

The family of Willie Truman Fitts created this Life Tributes page to make it easy to share your memories.

Send flowers to the Fitts family.