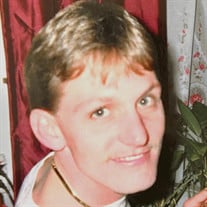 SOUTH BOSTON Christopher Scott Watts prematurely left this earth on October 5th, 2020. Chris was born in Halifax, VA. He proudly served in the United States Army where he discovered an enduring love of guns. After his Army career he went on to become plant manager of Charter Communications in Farmville VA until his early retirement in 2009. Chris loved his job and all the wonderful friends he made along the way. He was son to Helen Watts and the late John B (JB) Watts, a brother to John Watts, Todd Watts and his younger sister Sherry (who he never forgave for taking his spot as baby of the family). He was preceded in death by his wife Annette who left Chris’s side at a shockingly young age. A profound loss that never left him. Chris had many aunts, uncles, nephews, cousins and friends that he held dear… Kelly Talbott was one of the most beloved. Above all else he was father to John Perry (JP) Watts whom he cherished and adored as only a father could. JP truly was his pride and joy. Now he is Chris’s future… We ask that when you read this to think of the paths we each take, the twist and turns of a life. Say a prayer and then laugh, whole heartedly, purely because you were given the gift of knowing Chris. He was lively and hysterical and a lifelong suffering Miami Dolphins fan! If you knew him you have smiled because of him (perhaps even danced with him), that is the gift that he left for us and confirmation of a life well lived…one might even say a legacy. We will love you forever and keep you for always. “I wonder how many people I’ve looked at all my life and never really seen.” – John Steinbeck A Private Celebration of Chris’s Life will be held at 2:00 PM on Saturday, October 10, 2020 at Brooks Lyon Funeral Home Chapel for close friends and family. The family will receive friends on Friday, October 9, 2020 from 6:00-7:30 PM at Brooks Lyon Funeral Home. The family requests those wishing to give memorials please consider Halifax County Cancer Association, PO Box 1891, Halifax, VA 24558 or American Cancer Society, PO Box 22478, Oklahoma City, OK 73123.

SOUTH BOSTON Christopher Scott Watts prematurely left this earth on October 5th, 2020. Chris was born in Halifax, VA. He proudly served in the United States Army where he discovered an enduring love of guns. After his Army career he went on... View Obituary & Service Information

The family of Christopher Scott Watts created this Life Tributes page to make it easy to share your memories.

Send flowers to the Watts family.