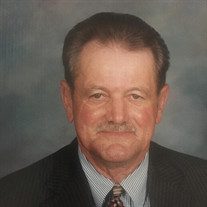 HALIFAX, VA Mr. James Henry Satterfield, Sr. of Winn’s Creek Road, Halifax, VA passed away Tuesday, December 5, 2017 at the age of 80. Born in Halifax County on September 27, 1937, he was the son of the late Bedford Henry Satterfield and the late Mary Long Satterfield and was married to Mary Ann Satterfield. James was retired from Virginia Department of Transportation as a motor grader operator for 30 years. He loved VDOT and all his co-workers. His hobbies include spending time with his wife, listening to bluegrass music, gardening, especially raising tomatoes, yard work, and spending time with his dog, Bullet. In addition to his wife, he is survived by sons, Steve Satterfield (Jackie), Doug Satterfield (Jennifer), and James Satterfield, Jr (Lisa) all of Gretna, VA; daughter, Sandra Hedden (Tobin) of Woodburn, Oregon; step children, Nickie Granger, Betty Kramer, both of Halifax, Jason Branscome of Roxboro, NC, Rita Cox of South Boston, and Isaac Inge of Okracoke Island, NC; 16 grandchildren, 15 great grandchildren and 1 great great grandchild; sister, Virginia Lowery of South Boston; and brother, Jesse Satterfield of Danville, VA. Other than his parents, he was preceded in death by siblings, Elizabeth Rogers, Irene Owen, Shirley Loftis, Steve Satterfield, Wallace (Frank) Satterfield and a son, Garland Satterfield. The family will receive friends on Saturday, December 9, 2017 at Brooks Lyon Funeral Home from 5:00 until 7:00 PM and other times at the home, 2140 Winn’s Creek Road, Halifax, VA. A Celebration of Life for Mr. Satterfield will be held at a later date. The family requests those wishing to give memorials to please consider a charity of your choice.

The family of James Henry Satterfield Sr created this Life Tributes page to make it easy to share your memories.

Send flowers to the Satterfield family.