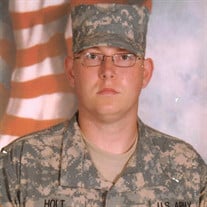 SOUTH BOSTON Mr. Allen Fred Holt, age 35, passed away Thursday, January 14, 2021 at his residence. He was born on July 4, 1985 to Edward Thomas Holt and the late Barbara Cole Holt. Allen was a graduate of Halifax County High School and waste water plant operator for Town of South Boston. He was a veteran of the US Army where he served in Iraq and Afghanistan. He loved hunting and fishing and was passionate about helping other people. He was a natural artist and could play any instrument he put his hands on. In addition to this father, Ed, he is survived by a son, Isaiah Thomas Holt; uncles, Bobby Holt of Roxboro, NC and Timmy Cole (Regina) of South Boston; aunt, Edith Cole of South Boston; cousins, Shane Cole of South Boston, Edward F. Cole, Jr (Tanya) of Halifax and Jaime T. Cole (April) of Halifax. He was preceded in death by his mother, Barbara Cole Holt; sister, Lee Ann Holt; and brother, Willie Thomas Holt. Funeral Services will be at 4:00 PM on Sunday, January 17, 2021 at Brooks Lyon Funeral Home Chapel with Reverend Don Bryant officiating. Interment will follow at Shady Grove United Methodist Church Cemetery. The family will receive friends one hour prior to the service, 3-4:00, at the funeral home and other times at the home. Online condolences may be expressed to the family at www.brookslyon.com. The family is being served by Brooks Lyon Funeral and Cremation Services, 115 Main Street, South Boston, VA.

The family of Allen Fred Holt created this Life Tributes page to make it easy to share your memories.

Send flowers to the Holt family.