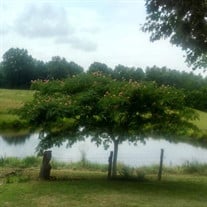 RED OAK - Mr. Allen G. “Bill” Jones of Red Oak, VA passed away on Tuesday, February 21, 2017 at the age of 83. He was born in Charlotte Co., VA on April 24, 1933 the son of the late Alvin T. Jones and the late Ozelia Terry Jones and was married to Barbara Ann Austin Jones. Mr. Jones was a member of Public Fork Christian Church where he was a deacon for many years. Bill loved his family and church. He enjoyed being on the farm, working with his hands, and piddling in the shop. Mr. Jones is survived by his wife, Barbara Ann Austin Jones; a daughter, Beverly Nichols Brame (David) of Richmond; grandson, Nicholas A. Wilson (Jackie) of Hillsborough, NC; granddaughter, Katie Parker (Jasper) of Hillsborough; great grandchildren, Jaden, Parker, Julian, Lilly, and Holden; sisters, Arlene Langford and Gladys Lanyon, both of Chase City, VA. He was preceded in death by his parents and a brother, Joseph E. Jones. Funeral services will be held on Friday, February 24, 2017 at 2:00 PM at Public Fork Christian Church with Evangelist Denis Fritz officiating. Burial will follow in the church cemetery. The family will receive friends at Public Fork Christian Church on Friday from 1:00 PM until 2:00 PM and at other times at the home, 381 River Jones Lane, Red Oak. The family requests that those wishing to give memorials please consider Public Fork Cemetery Association, 1720 Jeb Stuart Hwy., Red Oak, VA 23964.

The family of Allen G. "Bill" Jones created this Life Tributes page to make it easy to share your memories.

Send flowers to the Jones family.