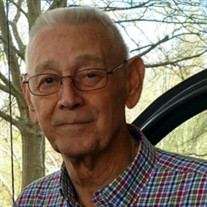 SOUTH BOSTON Mr. Charlie Monroe Clark, Sr. of South Boston went to be with his Lord and Savior on Thursday, April 13, 2017 at the age of 76 following a brief battle with cancer. He was born in Halifax Co., VA on March 26, 1941 the son of Mary... View Obituary & Service Information

The family of Charlie Monroe Clark Sr. created this Life Tributes page to make it easy to share your memories.

Send flowers to the Clark family.