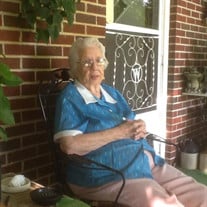 SOUTH BOSTON Dorothy B. Wilmoth passed away on August 14, 2021 at South Boston Health & Rehab at the age of 98. She was born in Clover, VA on December 21, 1922 to Eddie Austin Buchanan and John Richard Buchanan. Dorothy grew up on a farm and retired from Burlington Industries after 26 years of employment. She was a member of Scottsburg Methodist Church and Scottsburg Fire Department Auxiliary. Her favorite things included flowers (she always had a beautiful yard full of flowers), visiting with family and friends, reading, bingo at the firehouse, crossword puzzles and travel. Dorothy is survived by her sister and brother-in-law, Blanche and David Bare; daughter and son-in-law, Dorothy Eileen and David Thatcher and her grandsons Will and John Clay; her daughter Linda A. Wilmoth, and her son Bradley W. Wilmoth; grandchildren by deceased son John M. Wilmoth Jr, Christie and Andy Moss and Carrie and Jeff Peeden; numerous great grandchildren, great great grandchildren, nieces, nephews and cousins. In addition to her parents, she was preceded in death by siblings, John, Jane, Bertha, Austin, David, Roger Buchanan and Ruth Epps; her son John Marshall Wilmoth and grandson John Michael Wilmoth. Services will be private at this time, however a memorial service will be held at a later date for family, friends and her community. Dorothy will be missed by all and in lieu of flowers donations may be made in Dorothy’s name to Sentara Halifax Hospice, 2204 Wilborn Ave, South Boston, VA 24592, Halifax County Rescue Squad, PO Box 183, South Boston, VA 24592 or Virginia Alzheimer’s Association, 8180 Greensboro Drive, Suite 400, McLean, VA 22102. Her family greatly appreciates all the kindness shown Dorothy during her life. Online condolences may be expressed to the family at www.brookslyon.com. The family is being served by Brooks Lyon Funeral and Cremation Services, 115 Main Street, South Boston, VA 24592.

SOUTH BOSTON Dorothy B. Wilmoth passed away on August 14, 2021 at South Boston Health & Rehab at the age of 98. She was born in Clover, VA on December 21, 1922 to Eddie Austin Buchanan and John Richard Buchanan. Dorothy grew up on a farm and... View Obituary & Service Information

The family of Dorothy Buchanan Wilmoth created this Life Tributes page to make it easy to share your memories.

Send flowers to the Wilmoth family.