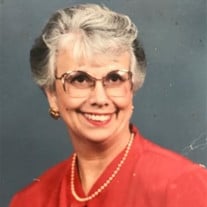 JAVA, VA - Helen Louise Kincaid Lantz McDaniel, age 83 of 16056 Halifax Road, Java, VA went to be with The Lord at The Woodview nursing home on March 30, 2017 after a short struggle with Alzheimer’s. She was born in Appomattox on May 19, 1933 and she and her family moved from Roanoke, VA to South Boston in 1963. She and her late husband were employed by Cox Oil and Gas. She was a school bus driver and had many young friends who have grown up and remember and speak of her to this day. She worked for The Bank of America and later for Faulkner and Lawson and was referred to as "The wreath lady"! She was very outgoing and athletic. She also loved her flowers and plants all around her yards. She had a green thumb and shared her flowers with her family and friends. She is survived by her husband of 22 years, Henry Thornton McDaniel; her son, Richard A. Lantz and Janet (Lawter), granddaughter, Ashley and Whit Gibbs, great granddaughters, Haley and Brently; her daughter, Katherine (Kathy) and husband Jim Debiec, grandsons, Billy Moore and Ricky Moore (Gina), great granddaughters, Sydnie and Paisley Moore; her daughter, Linda and Tommy Worsham, grandson Dan Elliott (Sochet), great grandchildren, Griffin and Isabella; and daughter-in-law Kim Lantz, grandchildren, Sean Lantz, and Staci Lantz, great grandson, Jesse Fry. She is also survived by many relatives in Roanoke and a special niece, Vickie Keener. She was preceded in death by two sons, infant Robert Daniel Lantz and Walter Eugene Lantz; her first husband, Herbert G. (Herb) Lantz, Jr.; a brother, Jimmy Kincaid; and her mother, Virginia Irene Glover. Funeral services will be held on Saturday, April 1, 2017 at 2:00 PM at the Brooks Lyon Betty B. Jones Chapel with the Reverend Doctor Russell Lee officiating. Burial will follow in Oak Ridge Cemetery. The family will receive friends at Brooks Lyon on Friday, March 31 from 7:00 PM until 8:30 PM and at other times at the home, 16056 Halifax Road, Java and at the home of Kathy and Jim Debiec, 1011 Waddell Woods Lane, South Boston. In lieu of flowers, please consider Paws and Claws SPCA, PO Box 578, Halifax, VA 24558.

JAVA, VA - Helen Louise Kincaid Lantz McDaniel, age 83 of 16056 Halifax Road, Java, VA went to be with The Lord at The Woodview nursing home on March 30, 2017 after a short struggle with Alzheimer&#8217;s. She was born in Appomattox on May... View Obituary & Service Information

The family of Helen Lantz McDaniel created this Life Tributes page to make it easy to share your memories.

Send flowers to the McDaniel family.