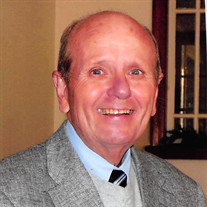 SOUTH BOSTON - Mr. Larry Brooks Harris, husband of Lucille “Lucy” Dry Harris, passed away Wednesday, April 10, 2019 at the age of 71. Born in Oxford, NC on June 26, 1947, he was the son of Mildred Blackwell Harris and the late E. Brooks Harris. Larry was a graduate of Henderson High School, Class of 1965 and later a graduate of Campbell University, Class of 1974. He was a veteran of the US Army and served from 1970-1973. He was employed with J.P.Stevens for 28 years and for 14 years he was with Longwood University “Small Business Development”. He was an active and devoted member of Main Street United Methodist Church, where he served as a Lay speaker. Larry was a member of the South Boston Rotary Club, served on the South Boston IDA, and was a committee member of Destination Downtown South Boston. He served as a volunteer at Sentara Halifax Regional Hospital and board member of Mental Health of America. In addition to his wife, Lucy, he is survived by a daughter, Katherine Elizabeth Harris of South Boston, his mother, Mildred B. Harris of Henderson, NC, and numerous other family members. Funeral Services for Larry Harris will be held on Saturday, April 13, 2019 at 2:00 PM at Main Street United Methodist Church. Interment will be at Sunset Gardens 3174 US-158 Bus, Henderson, NC 27537 at 4:30 PM on Saturday. The family will receive friends one hour prior to the service on Saturday. The family requests those wishing to give memorials please consider Main Street United Methodist Church, 701 N. Main Street, South Boston, VA 24592 or Spring Valley United Methodist Church, 955 Spring Valley Rd., Henderson, NC 27537.

The family of Larry Brooks Harris created this Life Tributes page to make it easy to share your memories.

Send flowers to the Harris family.