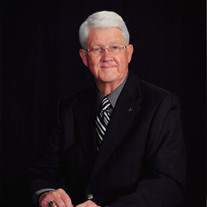 VIRGILINA Mr. Lloyd Cumbie Dixon of 7083 Bill Tuck Highway, Virgilina, Va. went to be with his Lord and Savior on May 10, 2021 at the age of 86. He is survived by his wife and soul mate of 58 years, Betty Jane Stevens Dixon of the home, and one son, Michael Lloyd Dixon. He was preceded in death by his parents, Charlie Franklin Dixon, Sr. and Evelyn Cumbie Dixon, and by one brother, Charlie Franklin Dixon Jr. Mr. Dixon was born in South Boston on March 22, 1935, and was the first baby delivered by Dr. William Lloyd Eastlack, when he went into practice in South Boston, after whom he was named. Mr. Dixon was a graduate of Main Street Grammar School and C.H. Friend High School. During his years in High school, he worked behind the soda fountain at Faulkner & Lawson Drug store. He also worked several years at Fuller’s and Wilson’s Mens shop. He proudly served in the U.S. Air Force, was an Honor Graduate of their Statistical Specialist School. He was then assigned to the Strategic Air Command at Lincoln Air Force base in Nebraska. From there he was transferred to Sidi Slimane Air Force base in Morocco, North Africa. He was Honorably discharged in April 1963. He is a member of the American Legion Post 8 in South Boston. He was retired from the local Georgia-Pacific manufacturing plant where he was an accountant and credit manager. While working there, he attended Danville Community College night classes and graduated Magna Cum Laude in 1983 with an Associate Degree in Applied Science, majoring in Business Management. After a couple of years off, Mr. Dixon decided to go back to work part time. He then worked six years as a traveling salesman for Benton-Thomas Office Products and then worked as Manager of Woodcrest Apartments for the next eleven years. Mr. Dixon was an outdoorsman, was a hunter for many years and particularly enjoyed fly fishing. He also enjoyed working in the yard and repairing things around the house. He also enjoyed shooting pool and playing ping pong, and one year was ping pong champion in the Jaycees. He was a past member of the South Boston Jaycees and the Southfax Sertoma Club. In 1948, he joined the First Baptist Church on Main Street and in 1963 moved his membership to Grace Baptist Church in the Omega community where he and Betty Jane built their home. He became very active in Grace and served as an ordained Deacon, a Sunday School teacher for over fifty years, was Church Treasurer for twenty one years and served on numerous committees. In addition to his wife and son, he is survived by nieces Debbie Dixon Mosley, Bonnie Dixon Martin and husband, Jim; nephew Charlie Franklin Dixon,III and wife Toria, nephew, Christopher Travis Stevens and great niece Sophie Stevens, great nephew Ethan Meadows and wife Kirby and their children Jackson and Kennedy, great niece Leslie Meadows Norris and husband Taylor, great nephew Charlie Franklin Dixon, IV and great niece Carson Dixon Coomes and husband Ben, great niece Amanda Harris and children Damien and Nolan, sister-in-law Wendy S. VanEimeren, brother-in-law Wayne S. Stevens, and sister-in-law Martha W. Stevens. Funeral Services will be held at 2:00 PM on Sunday, May 16, 2021 at Grace Baptist Church with Reverend Jack Stewart officiating. Interment will follow in Grace Baptist Church Cemetery with Military Honors. The family will receive friends on Saturday, May 15, 2021 from 6:30 – 8:00 PM at Grace Baptist Church and other times at the home. In lieu of flowers, please consider Grace Baptist Church Cemetery Fund, 1058 Buckshoal Road, Virgilina, VA 24598, or Halifax County Cancer Association, PO Box 1891, Halifax, VA 24558 or Midway Volunteer Fire Department, 11009 Bill Tuck Hwy, Virgilina, VA 24598. Online condolences may be expressed to the family at www.brookslyon.com. The family is being served by Brooks Lyon Funeral and Cremation Services, 115 Main Street, South Boston, VA..

VIRGILINA Mr. Lloyd Cumbie Dixon of 7083 Bill Tuck Highway, Virgilina, Va. went to be with his Lord and Savior on May 10, 2021 at the age of 86. He is survived by his wife and soul mate of 58 years, Betty Jane Stevens Dixon of the home, and... View Obituary & Service Information

The family of Lloyd Cumbie Dixon created this Life Tributes page to make it easy to share your memories.

Send flowers to the Dixon family.