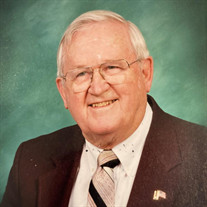 Dr. Melvin Joel Bradshaw, Sr., died March 19, 2021. He was born on January 1, 1925, in Sedley, Southampton County, Virginia. He was a graduate of Franklin High School, The University of Richmond, and the Southern Baptist Theological Seminary in Louisville, Kentucky. During college and seminary, Melvin pastored small churches knowing that God was calling him into full-time Christian service. A deacon at his church prayed, “Lord, we have sent soldiers to win the war. Now help us send missionaries to win the Japanese to Christ.” This was his early call to foreign missions. In Japan, Melvin and his wife Edith Claytor, served as missionaries for 25 years (1950-1975) under the Foreign Mission Board of the Southern Baptist Convention. His roles included teacher, hospital chaplain, and pastor. On July 9, 1979, Melvin married Jean Quigg and added five children to his family. In the following years, Melvin served as the chaplain of the Virginia Baptist Children’s Home, Director of Missions for the Dan River Baptist Association, and pastor or interim pastor for several Virginia churches. Together, he and Jean founded the Hospice of Halifax County, and for several years served as volunteers for the Halifax Regional Hospital and the South Boston Hospital. In 1969, Melvin was awarded a Doctor of Divinity degree by the University of Richmond. The citation for his degree is as follows: “Persuasive preacher of the Christian message; Ambassador of Christ in distant lands; Teacher, counselor, and evangelist of the Gospel; Worthy representative of this University.” This citation clearly reveals the life and work of this good man. Melvin is survived by his wife, Jean, of Lynchburg; his sons, Joel (Jean) of Honolulu, HI, Barry (Pilar) of Fairfax, VA, Ken (Robin) of Paducah, KY; daughter, Joanne (Tom) Horton, of Severn, MD; stepsons, Steve (Ann) Quigg, of Kansas City, MO, Mark (Barbara) Quigg, Las Cruces, NM, and Chris (Karen) Quigg of Lynchburg, VA; step-daughter, Julie (Ralph) Goodwin, of Gilbert, AZ; many grandchildren; great-grandchildren; a step son-in-law, Jim Yoder; and a host of friends. In addition to his parents, Melvin was predeceased by a son, Rick Bradshaw and a stepdaughter, Carolyn Yoder. Donations in memory of Melvin Bradshaw may be made to The Centra Hospice, 2097 Langhorne Drive, Lynchburg, VA 24501. A memorial service will be held at 1:00 pm on Saturday, March 27, 2021, at Dan River Baptist Church, 1228 Dan River Baptist Church Road, South Boston. Please come and celebrate with us because Melvin is now home with our Savior Jesus: “I go there to prepare a place for you…” (John 14:2b). Due to the Governor's guidelines, social distancing and face masks are required. Seating will be limited, however, the service will be livestreamed on both Brooks Lyon Funeral Home's facebook page as well as Dan River Baptist Church's facebook page. Furthermore, there will be availability to listen to the service from your vehicles in the parking lot when tuned in to 95.9 FM.

Dr. Melvin Joel Bradshaw, Sr., died March 19, 2021. He was born on January 1, 1925, in Sedley, Southampton County, Virginia. He was a graduate of Franklin High School, The University of Richmond, and the Southern Baptist Theological Seminary... View Obituary & Service Information

The family of Dr. Melvin Joel Bradshaw Sr. created this Life Tributes page to make it easy to share your memories.

Send flowers to the Bradshaw family.