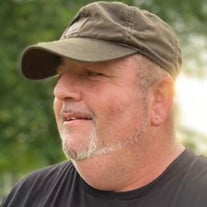 William Owen Puryear, Jr., of Nathalie, VA, went to his Heavenly home on Saturday, June 26, 2021, at the age of 51. He was born on October 20, 1969, in Halifax County to the late William Owen Puryear, Sr. and the late Helen Wilmoth Epps. William was a dedicated employee of the Halifax Country Club, where he was the Course Manager. He thoroughly enjoyed working on cars, experimenting with recipes and spending time with his family; hanging out, playing horseshoes, and volleyball. William is survived by his wife, Leslie Puryear; children, Sierra and Michael Johnson, Haley Puryear, Gabrielle Puryear, Richard and Tammy Culley, Jeremy Culley, Victoria Burch, Jessica Wilborn, Nathaniel Rhodes, Jessica Parris, Katie Hyatt and Greg Conner, who was like a son to William; as well as 13 grandchildren. Additionally, he is survived by siblings, Helena Maria Daniel, Juanita Puryear Holt, Rebecca Garner and Todd Long; brother in laws, Robert Wilborn and Kenneth Wilborn; numerous nieces and nephews; and many other family members. In addition to his parents, William was preceded in death by a sister, Melissa Mae Long and a nephew, Ryan Thomas Puryear. Funeral services will be held at 1:00 P.M. on Friday, July 2, 2021, in the chapel at Brooks Lyon Funeral Home. Burial will follow after the service. The family will receive friends Thursday, July 1 from 6 – 8 P.M. at the funeral home. Online condolences may be expressed to the family at www.brookslyon.com.

The family of William Owen Puryear Jr. created this Life Tributes page to make it easy to share your memories.

Send flowers to the Puryear family.