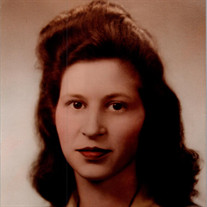 Hilda Barksdale Martin was born on October 29, 1927 to Charles and Susie Barksdale. She was the last surviving sibling from a family of five, preceded in death by her loving sisters Bertha Landrum and Elizabeth Martin, her twin sister, Virginia Clark, and their only brother, Dudley Barksdale. Hilda is also survived by a sister-in-law, Bea Mingo of San Marcos, California. She was born during the depression and those life lessons she passed along to her children. Hilda was married to the late Eugene Douglas Martin for sixty-one years, before his death in 2007. She is survived by her only child, Vickey Martin Shelton (the late Kenneth Shelton), her only grandchild, Stephanie Brooks Elliott (the Honorable Richard Abernethy), and her only great-grandchild, Zachary Paul Park. Her family tree holds many branches, which are spread wide and far through many beloved nieces and nephews. Hilda is formerly of Turbeville, Virginia having lived her entire life in Virginia. In 2008 after the death of her husband, Hilda moved to Dallas, North Carolina where she built an entirely new life centered around her children. She built a house beside her granddaughter and great-grandson, and they spent their free time gardening and cooking. Zachary especially enjoyed introducing her to new cuisines, and her favorite was going for dim sum. She fed hundreds of people throughout her life, feeding her family, the workers on their farm daily, friends, loved ones and members of her community. She never missed an opportunity to cook for a church potluck, baby shower, wedding shower, holiday gathering or illness of someone she knew. Her from scratch recipes will live on in the kitchens of her family and many friends. Hilda lived an extraordinary life full of love, compassion and caring for the least of these. She worked alongside her husband for fifty years growing tobacco, alfalfa hay and raising cattle and chickens. She delighted in a warm kitten in her lap, or snuggling a new puppy. She was a loving and loyal wife, mother and grandmother and the caretaker of many family members throughout her life. She taught children, youth and adult Sunday school, cared for and maintained the church and grounds, and was an elder in her church. Later in life, she was a lay minister in her community, after having completed a theology degree from a local college. She was a member of New Harvest Assembly of God Church, South Boston, Virginia. She was also a former longtime member of Cross Roads Baptist Church in Turbeville, Virginia. Since moving to Dallas, she attended First United Methodist Church of Gastonia with her children. Although little in stature, Hilda was a courageous and fierce advocate. She spoke in church, at community events and even had her own bible study and talkshow on the radio. After they retired from farming, Hilda and Doug continued to garden and farm. Hilda planted a flower garden the first year, and continued to build it year after year with people driving across the county to see. She canned the vegetables that Doug grew in his “retirement” garden, and won numerous awards at the county fair for her flowers, cakes and canned goods. She never slowed down and was never idle, even after having two broken hips and replacing them both because she wore out the hardware. Zachary and Stephanie routinely watched Hilda from their kitchen window weed eat her own yard and even cut down trees with a handsaw. Her servant heart can best be relayed by one of the many stories about her compassion. When Hilda and Doug bought their farm in 1956, the former owner was suddenly left homeless. He told them at the closing that he didn’t have anywhere to go, and Hilda told him he could stay with them. Hilda, Doug and Vickey looked after him faithfully for eighteen months providing around the clock care. Her firm faith in Christ and her determination to show him in every action, word and deed has shined a bright and steady light into many lives. Due to COVID, the family will hold a private graveside service only at Halifax Memorial Gardens in South Boston, Virginia. To honor Hilda’s giving spirit, the family requests that in lieu of flowers, donations be made to the Youth Ministry of First United Methodist Church of Gastonia, 190 E. Franklin Blvd., Gastonia, NC 28052 or to Sentara Halifax Regional Hospice and Palliative Care, 2204 Wilborn Avenue, South Boston, Virginia, 24592.

Hilda Barksdale Martin was born on October 29, 1927 to Charles and Susie Barksdale. She was the last surviving sibling from a family of five, preceded in death by her loving sisters Bertha Landrum and Elizabeth Martin, her twin sister, Virginia... View Obituary & Service Information

The family of Hilda Barksdale Martin created this Life Tributes page to make it easy to share your memories.

Send flowers to the Martin family.