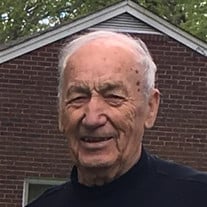 SOUTH BOSTON Mr. James “Carl” Duffie, Sr. passed away on Monday, September 23, 2019 at the age of 89. He was born in Halifax County on March 22, 1930 to the late Jollie James Duffie and the late Elizabeth “Virginia” Reaves Duffie. Carl was married to Nancy Crenshaw Duffie. Growing up Carl was a football, basketball and baseball standout at C.H. Friend High School. In his senior year at Friend (1951), Carl won the T.C. Watkins award for best all-around athlete. Carl later joined the U.S. Air Force and played for a service team while stationed in Germany. Duffie played for a service softball team that won a European championship. Carl returned to South Boston and was involved in little league, helping the youth of the area. He coached in Dixie Youth and the Midget basketball league. He was inducted into the South Boston - Halifax County Sports Hall of Fame in 2012. Carl was a member of McCanless Memorial United Methodist Church and sang in the choir. He loved gardening, boating, sports and coaching youth sports. He enjoyed watching baseball, a fan of the New York Yankees, and Duke basketball. He was first employed by Imperial Tobacco Company and later with SunTrust Bank, where he retired after 23 years of employment. Carl never met a stranger and no matter where he traveled, he ran in to someone he knew. Carl loved his family dearly. In addition to his wife, Nancy, he is survived by a son, James Carl “Jay” Duffie, Jr and wife, Rhonda Wall Duffie; daughter, Tammy Duffie Scott; grandchildren, Mandy Mae Scott, Andrew James “Drew” Duffie, and Jason Thomas Duffie; sister, Carole Rottler and numerous other family members. In addition to his parents, he was preceded in death by brothers, Gerald S. Duffie and Ralph N. Duffie. Funeral Services will be held at 2:00 PM on Thursday, September 26, 2019 at Brooks Lyon Betty B. Jones Chapel with Reverend Joe Trickey officiating. Interment will follow in Oak Ridge Cemetery. The family will receive friends one hour prior to the service, 1:00-2:00 PM at Brooks Lyon Funeral Home and other times at the home. The family requests to those wishing to give memorials to please consider McCanless Memorial UMC, PO Box 876, South Boston, VA 24592.

The family of James Carl Duffie Sr. created this Life Tributes page to make it easy to share your memories.

Send flowers to the Duffie family.