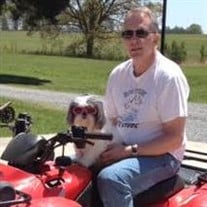 South Boston, VA - Michael Anthony Cole, son of the late Grady Talmadge and Lillian Woody Cole, passed away on Thursday, June 25, 2020, at the age of 61. He was born on October 5, 1958, in Halifax County. Michael received simultaneous bachelor’s degrees in government and economics from the University of Virginia, from which he graduated with high honors. He received his law degree from the University of Virginia, where he wrote for the Journal of Law and Politics and was active in the Federalist Society and the law school’s Moot Court competition. Michael returned to the Southside area in 2003 after 21 years of law practice in Atlanta. Michael was a founding member of Cole, Bryman & Clerke. Most recently, Michael retired as a partner from the firm of Woods Rogers in Danville, VA. He has been involved with the Leukemia Society of America and the Atlanta Humane Society, and mentoring for Big Brothers of America. Michael was a civil war historian. He held a black belt in karate and sparred with Chuck Norris. Michael was a devoted animal lover and never met a creature, big or small, he didn’t like. Michael is survived by his fiancé, Janice Miller Nascimento; nieces and nephews, Morgan, Thomas, Kimberly, Blair and Lauren Cole, and cousins, Jessie and Andy Lowery. In addition to his parents, he was preceded in death by his brother, Mark Randall Cole. A Memorial service will be held at 7:00 PM on Thursday, July 2 at Maple Grove Farm, 4122 Virgie Cole Rd., South Boston, VA. The Reverend Raymond Wooten will officiate. In lieu of flowers, the family asks that donations to the Halifax Dog Squad, Inc., P.O. Box 418, South Boston, VA 24592 or the Atlanta Humane Society, PO Box 746181, Atlanta, GA 30374 be considered. Online condolences may be expressed to the family at www.brookslyon.com. The family is under the care of Brooks Lyon Funeral Home, 115 Main Street, South Boston, VA.

The family of Michael Anthony Cole created this Life Tributes page to make it easy to share your memories.

Send flowers to the Cole family.